October, it was just the best.

I always think that October is great, but this October truly was a wonderful month. The days were packed in the best ways possible, but sadly, that translated into a very slim month of reading for me. But regardless, let’s talk October books (I say as I eat the very last of my leftover Halloween candy, because: a. I’m hungry; and b. It just seemed appropriate when writing an October-themed blog post).

The Girl Who Loved Tom Gordon
By Stephen King

“Life could be very sad, it seemed to her, and mostly it was what it could be. People made believe that it wasn’t, and they lied to their kids … so as not to scare them or bum them out, but yeah, it could be sad. The world had teeth and it could bite you with them anytime it wanted. She knew that now. She was only nine, but she knew it, and she thought she could accept it. She was almost ten, after all, and big for her age.”

This was my first attempt at a “horror” book. When I walked into the horror section at Half Price Books (a section I am very unfamiliar with), I went straight to the Stephen King book shelf, because I knew the man was legendary, but I had no idea that he had penned SO many novels. There were tons to choose from, so honestly, I picked the shortest one I could find. And, surprisingly, I think I picked well. The Girl Who Loved Tom Gordon follows the week-long journey of Trisha McFarland, a nine-year-old girl who is lost in the woods. Though there’s a brief supernatural element toward the end, most of the scariness is simply seeing this girl slowly lose control of her body—then mind—while trying to survive on her own. I’m generally against books or movies where little kids get hurt, but I loved this novel because of the mental strength of Trisha. Mr. King wrote her to be more of a heroine than a victim, and the entire novel leaves the reader astounded at her sharp and clever instincts. Seriously, I would not survive in the woods as well as Trisha McFarland. She thought in simple, nine-year-old terms, but that ultimately was what saved her (spoiler alert). 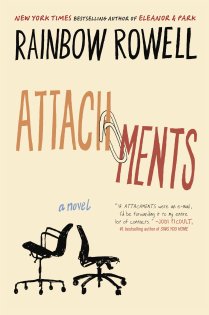 Rainbow Rowell does it again! I was having one of those days when I just needed a fun book, and this was it. The story begins at the turn of the millennium and involves a young man whose life hadn’t turned out quite like he had planned. Single, lonely, living with his mother…things could be better for our protagonist, Lincoln, who works as a Technology Security Specialist at a publishing company. (I totally made up that title for Lincoln, but it was something like that.) Essentially, Lincoln was paid to read emails that the system had marked as “questionable,” and give warnings to employees who used their work computers inappropriately. Well, Lincoln soon notices that he is constantly reading “marked” emails from two ladies at the pub house: Beth and Jennifer. Though he should have given them warnings immediately, the emails—or more accurately, the emailers—strike him as interesting, so he lets them slide and soon becomes invested in the lives of these two friends (But he’s never met them—Or even seen them!). He is especially fond of Beth, and I’ve got to tell you, I WAS TOO (not in a weird way, but in a I want to be her friend kind of way). This book was sweet, but I do wish Mrs. Rowell had developed Beth’s character a bit more. I mean, homegirl Beth was supa cool and also slightly obsessed with the month of October. I’m going to leave you with one more quote that I liked:

Every girl wants to be liked for her heart, and Attachments was a completely sweet and unrealistic story about how one boy fell for a girl’s heart.

That’s all I’ve got in terms of books. In terms of life, I got a job. It’s nice to have a paycheck again (or I assume it will be nice; I don’t get paid until the 15th), but it kind of feels like summer break is over, HA. I truly loved the past three months working contract, living with my aunt, and getting to know Dallas. But, all good things come to an end, and I am now a real adult again—job, apartment (move in on Saturday), and bills. But, I didn’t start the new job until November 1st, so at least I got to enjoy my favorite month with the freedom of a college kid.

KAT
Currently listening to “When You Were Young” by The Killers